Ambassador Bouhlal handed the charity contribution to Mrs. Alice Parker-Allotey, President of the Association of African Ambassador’s Wives in Japan (AWAAJ), that was raised from the 5th Africa Golf Cup held on October 14, organized by the Embassy of Morocco in collaboration with Kanagawa Country Club.

AWAAJ is active in various charity events and Mrs. Parker-Allotey commented “There are people who need support, not only in Africa but in many countries. This money will certainly bring smile to many and we thank His Excellency Mr. Bouhlal, Mr. & Mrs. Hirai and everyone who made the contribution.” 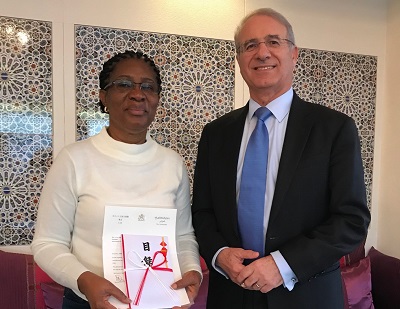