The UN General Assembly has adopted on March 3, 2021,by consensus the resolution proclaiming May 10 of each year as theInternational Argan Tree Day.

This UN resolution, initiated by Morocco, was largely co-sponsored by113 member states of the United Nations. The Argan tree, a tree specific to the Kingdom of Morocco, will thus be celebrated every year on May 10 as an intangible cultural heritage of humanity and ancestral source of sustainable development.The choice of May 10 is inspired by the cycle of maturation of the fruit of the Argan tree.

The Moroccan initiative was launched in February 2020 during an event held by the Kingdom in collaboration with the National Agency for the Development of Oasis and Argan Areas (ANDZOA),the UN Department of Economic and Social Affairs (UN DESA), FAO, UNESCO and the WHO. The event was concluded with the launch of the negotiation process of the resolution on International Argan Day,which was interrupted due to the effects of the COVID-19 pandemic on the terms and conditions of work at the UN. The Permanent Mission of Morocco to the United Nations relaunched the negotiation process in early 2021.This process was concluded after four rounds of virtual consultation meetings with UN member states.

The proclamation of International Argan Tree Day is a recognition of Morocco’s efforts, under the guidance ofHis Majesty King Mohammed VI, to protect the Argan tree.

It also highlights the key role of the Argan tree sector in achieving the 2030 Agenda goals and its contribution to sustainable development in its economic, social and environmental dimensions.The financial empowerment and emancipation of women in rural areas is one of the pillars of the text of this resolution. 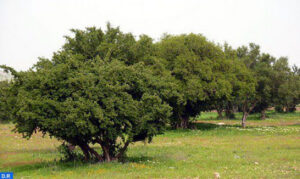