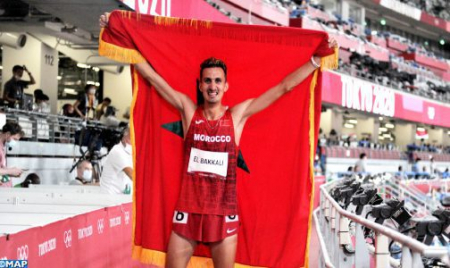 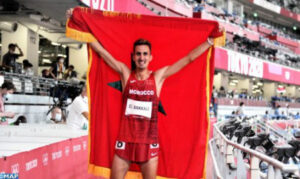 ”I dedicate this feat to HM King Mohammed VI, may God assist him, and to the Moroccan people who believed in my abilities,” said the Moroccan athlete in a statement to the press after the awarding ceremony.

He said that this gold medal is the fruit of work that spans several years, especially since the Olympic Games in Rio 2016 when he obtained the 4th position which reinforced his confidence to become a champion. Olympic, adding that his efforts “were not in vain” and have enabled him today to win the Olympic title, “which was not easy”.

Today’s race “was very difficult despite the absence of the former Olympic champion as there were some strong Ethiopian runners that I knew well,” he explained.

The Moroccan champion has let it be known that he is living under great pressure ahead of the race, which has prompted him to step away from social media, especially as he receives messages of encouragement from a large number of Moroccan citizens, who expressed their confidence in him to realize the Olympic dream.

After stressing that he has received all the necessary support from those close to him since his childhood, he noted that all his efforts resulted in obtaining the Olympic title in a difficult discipline and until then dominated by Kenyan athletes.

El Bakkali also expressed his pride in the Moroccan runners who preceded him to the podiums by what they were a source of inspiration for him, adding that he was in contact with several former Moroccan athletes who gave valuable advice to win this race.

“I managed the race rationally, and now I have made Olympic Games history and I am happy with this title,” he said.