The Sahara conflict: Origins and realities of a regional dispute

During the colonial period, Morocco (known then as the Cherifien empire) was divided from 1895 to 1912 by colonial powers into several zones (protectorates and colonies) administered by France (center) and Spain (north and south) while the city of Tangier was declared as an international zone administered by 12 powers.

In this context, Morocco’s decolonization process was not a straightforward, linear process but a rather long, gradual and complex one, which saw several negotiation processes with various colonial powers to fully regain its territorial integrity: in 1956, Morocco achieved independence from France, recuperated Tangier and launched negotiations with Spain, which led to its withdrawal, the same year, from the northern part of the Kingdom. Subsequently, Morocco negotiated the withdrawal of Spain from its remaining enclaves and territories in the south: Tarfaya in 1958 (Cintra Agreement), Sidi Ifni in 1969 (Fez Agreement) and the Saqia al Hamra and Oued Eddahab regions, in 1975, by virtue of the Madrid Agreements and the ties recognized by the International Court of Justice linking Morocco to these territories prior to Spanish rule.

The theater of a proxy war during the Cold War

For geopolitical reasons related to the Cold War context, Algeria – an important actor in the eastern block – resolved to obstruct the recognition by the international community of Morocco’s retrocession of all its territories under colonial rule. Using its diplomatic, military and financial assets, Algeria supported the creation of a separatist group known as the polisario in order to undermine Morocco’s sovereignty over the Sahara.

The involvement of the United Nations

The United Nations was tasked to monitor the ceasefire and to assist the parties in the organization of a referendum called for by Morocco in 1981 to resolve the matter. Divergent views on voter eligibility led to over a decade of negotiations with no outcome on the latter. In 2000, UN Secretary-General Koffi Annan recognized the non-inapplicability of the settlement plan and the holding of a referendum and called for the parties to work toward a political resolution to this regional dispute. Ever since, the Security Council supports the United Nations’ good offices to reach a mutually acceptable political solution of compromise between the parties to the regional dispute.

The Moroccan Autonomy Proposal: a win-win and compromise solution

In this context, Morocco submitted to the Security Council on 11 April 2007 an Autonomy Initiative proposal for its Saharan provinces in order to put an end to the long-standing artificial regional dispute. This proposal was the fruit of years of brainstorming and discussions within the UN in order to move beyond the existing status quo and find a final solution to this conflict. The Autonomy Initiative is a basis for negotiations with the other parties. It is substantive, innovative, and in accordance with the principles of international law.

Morocco’s efforts toward finding a compromise solution – through its Autonomy Initiative – were welcomed and deemed as “serious and credible” by the Security Council in all its resolutions since 2007. These efforts generated a positive momentum, which led to four formal rounds and nine informal rounds of negotiations with the polisario where Algeria and Mauritania were also present. The polisario and Algeria multiplied their attempts to derail the process through a systematic instrumentalization of human rights issues, natural resources and military provocations to break the ceasefire (Guerguerat crisis in 2016) stalling the talks since 2012. 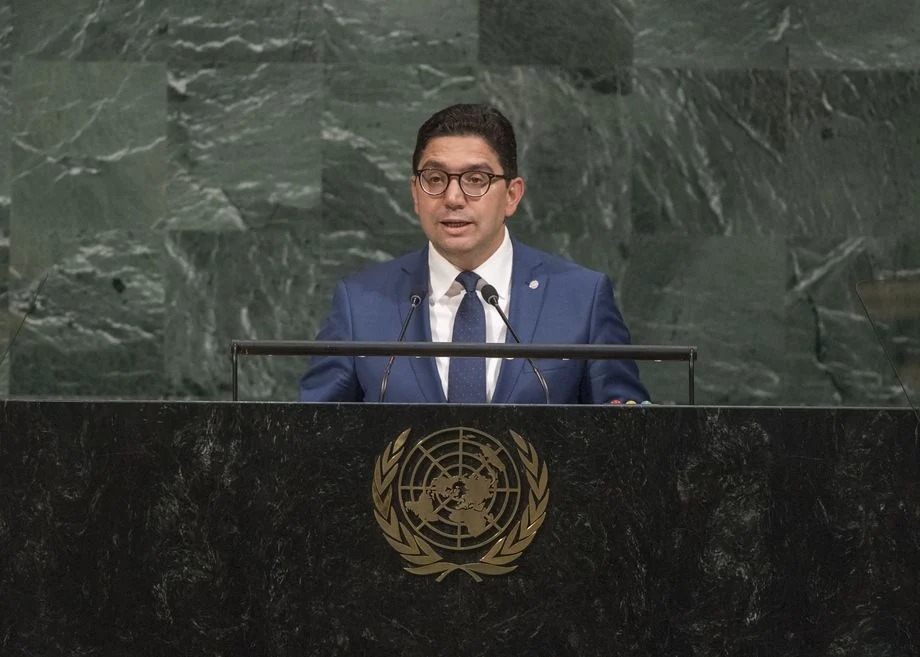 The polisario: a liberation movement?

During the Spanish colonial period, Morocco was the only country to claim the territory at the international level (UN decolonization committee in 1963). The polisario did not exist. This entity was created months prior to the withdrawal of Spain from the Moroccan Sahara, in February 1976, with the support of Algeria and Kadhafi of Libya. Internationally, the polisario is recognized as an armed group and in some instances as a terrorist group (eg: Japan), but not as a liberation movement. It predominantly comprises members of a single tribe among twelve dominant tribes in the western saharan provinces of Morocco. Yet, the polisario claims to be their sole representative, while it holds no legal or popular base or any democratic legitimacy to aspire to be the voice of the Sahrawis in the south of Morocco. Moreover, the polisario does not have a physical foothold in the Sahara as its base is in neighboring Algeria. The entire population of the polisario camps in the Tindouf region, in Algeria, is roughly estimated at around 45,000 inhabitants compared to the 350,000 Sahrawis living in Morocco as citizens who exercise their full rights (The southern provinces have the highest voter turnout in the country: 79%).

The unique nature of the Tindouf Camps

Since 1975, the population in the Tindouf camps in Algeria has been deprived of their rights as Algeria has systematically blocked the United Nations from holding a census of the camps, in accordance with international humanitarian law including the 1951 UN refugee Convention, all Security Council resolutions since 2011 and the Secretary-General’s recommendations in his latest reports. This approach aims to conceal the realities in the camps and maintain overestimated numbers of refugees, which allow local officials and the polisario to embezzle humanitarian aid for their personal and fraudulent enrichment. Furthermore, the continued militarization of the camps is a clear violation of international humanitarian law. The civilian population in Tindouf is prevented from free movement and the right to return to Morocco or settle in other parts of the Algerian territory or a third country. The population has been used as a tool to justify their cause in total disregard with their wellbeing.

Rising security threats and the risks of a failed State

In the past decade, the stability of the Sahel-Saharan region has steadily been eroded. Sahelian States have weak security institutions to address the emerging global challenges (drug trafficking/cocaine from South America, migration, terrorism). Terrorism is spreading progressively to the region of North-West Africa and the Lake Chad Basin. The nexus between transnational organized crime and terrorism is strengthening and continues to finance in the Sahel Saharan region armed groups and separatist movements such as the polisario of which some elements have been put on the State Department Terrorist list (eg: Adnan Abu Walid al-Sahrawi leader of ISIS in the greater Sahara).

In addition, the deep distrust between Morocco and Algeria, whose borders remain closed since 1994, hinders adequate security cooperation, which would be beneficial to the Maghreb and Sahel states. Despite Morocco’s repeated calls to open the borders, Algerian authorities have opted once more to maintain the status quo.

In light of these events, it is imperative that a long-lasting final solution to the regional dispute over the Sahara is found in order to foster greater regional security cooperation. The strategy adopted by Algeria and the polisario to push for an independent State is an unrealistic toxic approach that threatens to further destabilize the region through the creation of a failed state. A failed state on the Atlantic coast as well as on the doorsteps of the Mediterranean and the Sahel regions would be a threat to regional and international stability.  In this spirit, all the stake holders stressed that independence was not an option and supported a political solution of compromise that respects Morocco’s territorial integrity and its sovereignty.

Promising prospects for the future of the southern provinces of Morocco

Morocco is currently implementing its advanced regionalization process, with its southern regions serving as a pilot program. This process will provide Morocco’s regions to become autonomous powers. In addition, Morocco’s investments of hundreds of billions of US dollars in the region aim to transform the southern provinces into a major trade hub (Dakhla Atlantic Port) between Morocco and sub-saharan Africa as well as into a new touristic destination (Dakhla).  In 2017, McDonald’s opened its first franchise in the southern provinces (Laayoune).

Moroccan Sahara : Illusions and Realities about the conflict

There are many illusions about the Moroccan Sahara conflict. By vocation, these illusions hinder the understanding of the truth about this conflict and the adoption of a sound, productive and positive position to solve it. Although the historical realities of this conflict are known to all and felt on the ground, the need to deconstruct these illusions has now become an urgent necessity to get a clear picture of reality, which will contribute to reach a final solution based on the enlarged autonomy under Moroccan sovereignty, reinforcing the positioning of the Sahara as an economic development hub and a source of stability and security in the Sahel-Saharan region.

I. First illusion: “The Sahara region is the last colony in Africa” This is a blatant historical untruth. The Sahara region was colonized by Spain, but it has been liberated after the departure of the Spanish colonizer.

IV. Fourth illusion: “After the departure of Spain in 1975, the situation in the Sahara is still catastrophic.”  This is an absurd untruth. The Moroccan Sahara is today a model of solidarity and development in the Greater Sahara region, and its future prospects are even more promising.

V. Fifth illusion: “Human rights are seriously violated in the Moroccan Sahara, under the blackout” This is a false allegation, the Sahara is an open region and human rights are increasingly improved and developed within the framework of fairness, reconciliation and accountability.

VI. Sixth illusion: “Tindouf camps are a paradise of human rights” This is a tendentious allegation. These camps witness documented cases of slavery, torture, repression of the freedom of expression and dissent opinions. 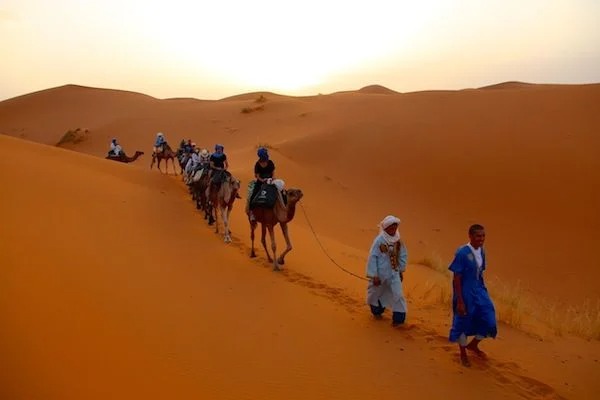 VII. Seventh illusion: “The project of the micro-State of the Polisario is a prelude to promote peace and democracy in the region” This is a false allegation. The alleged separatist republic has not managed to maintain security in Tindouf camps and does not meet the criteria of the State.

VIII. Eighth illusion: “MINURSO is the only peacekeeping mission that does not have a mandate to monitor human rights” This is a false allegation, as five UN missions out of the existing 12 do not have this mandate.

IX. Ninth illusion : “Morocco impedes the organization of the referendum” This is a ridiculous falsification of history. The truth is that the United Nations announced the impossibility of holding the referendum. Face to this situation and to support the conflict settlement process and break the deadlock, Morocco presented the autonomy proposal in 2007.

X. Tenth illusion: “The defensive sand wall is a racial separation wall” This is an erroneous and unfounded allegation. At no time, this wall has been described by the UN as “illegal” Moreover, movement is guaranteed through this wall.

XI. Eleventh illusion: “The Saharawi cultural heritage is being destroyed” This is false as Morocco has managed to protect and promote the Hassani Sahrawi culture.